Today we were able to attend on behalf of Bikers Down Society and meet with some of the family and friends of Wade Hall, who passed away so tragically last week in a motorcycle accident on Highway 103.

We were touched by the beautiful memorial urn that Wade’s family had made for his ashes and with Neil’s permission (Wade’s Uncle) we have included a photo for those who were unable to attend.  It was a nice memorial and it was well attended by the riding community and his family and friends, as Wade was a well known member of the area and New Ross.

Thank you to Wade’s Family members and the Devils Own for asking for donations be made to Bikers Down Toad Memorial Fund in Wade’s memory.  We were truly touched by this gesture.   I will post a follow up after we have received all the donations to thank everyone as we took several from members in attendance. 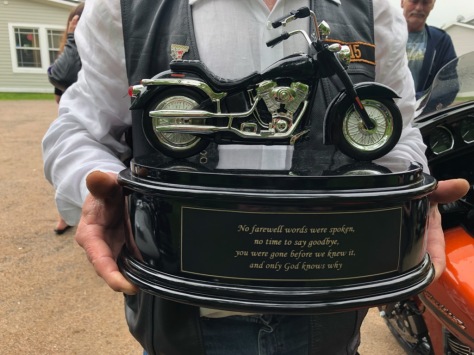